May 10, 2011
I wrote a post ages ago about anniversaries and what each one is supposed to mean*. For each of our anniversaries I want to try and stick to it and get gifts for each other that would also mean something. For our 1st anniversary we decided to buy something together which incorporated paper and also one of our favourite things; seeing the world. We have been wanting to make a travel map for ages and ages so we decided this was the perfect time to make it happen! Having already visited four new countries since we got married {Sri Lanka, Maldives, Slovakia & Austria}, and our planned trip to Morocco which will make five, we hope to add to it in the coming years. Graham thinks we should aim to visit 100+ countries. I can probably count 29 at the moment so there is still a long way to go! 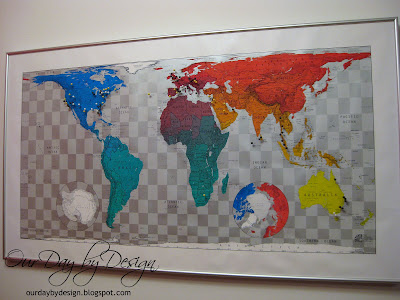 We bought the FUTURE Map in blue, emerald, pink & yellow from The Future Mapping Company {which I first saw in Conversation Pieces Scotland on Sunday piece and knew we had to have it} as we love the different equal area projection they use and the bright colours against a traditional world map. We stuck the map onto foam board before framing it in a custom size frame without glazing that we ordered from EzeFrame. You can buy the map framed but since we wanted to mount it onto the foam we decided to do it ourselves which also worked out a bit cheaper. It meant we could choose the frame finish as well; we went with aluminium as we figured that would always go with anything. 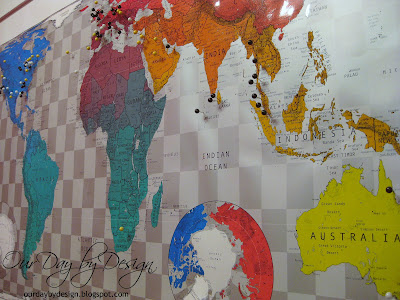 Different coloured pins show the places we have been in the world. We used three colours of pins; black for the places we have both been, white for the places I have been on my own or with my family and yellow for Grahams. Most of the places with black pins are places we have been together apart from a few in the US & Canada {San Francisco, LA, San Diego, Las Vegas, Toronto, Niagara Falls} and the Spanish islands which we have both been to but just not together. We bought red, green, blue & grey pins as well but the coloured ones just looked lost against the bright colours of the map and they grey ones were too long. The neutral colours work so much better. The pins we are using all came from Ryman while I had to source the grey online, from MapsWorldwide. 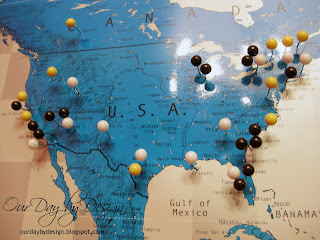 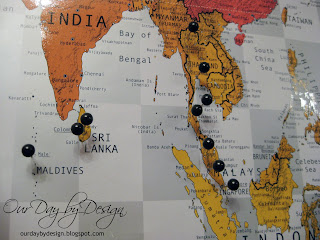 Some people only use the places they visited together but we didn't consider that as there are so many countries / cities that would miss out, especially with all the travelling Graham did while in the Air Force. If we have children we are not really sure whether to use a different coloured pin to show where they have been with us. 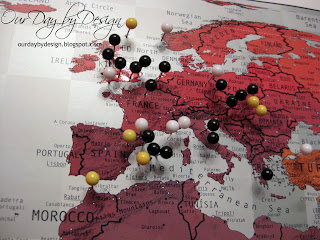 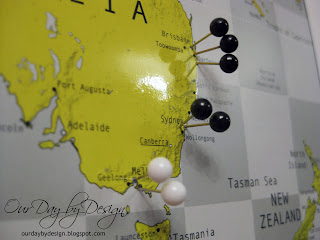 We were going to put it in the spare room but then we decided that since we love it we actually want to be able to see it; its now in our living room. We finally put it up on Easter Sunday at the same time as 4 other pictures; our large framed wedding photo, the painting of our wedding venue, the Manhattan prints I got a while ago and a painting we bought in Thailand 5 years ago!

I love how the map turned out, although it does highlight that we really need to go to Africa and South America to even the pins out a bit! Out of the seven continents we have visited North America, Europe, Asia & Australia together which leaves 3 to go; Africa, South America & Antarctica. Our Marrakesh trip will at least add another pin in Africa {Graham has been to South Africa}; maybe a trip to Peru should be next on the list? 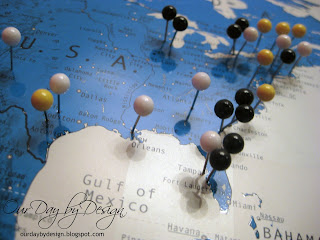 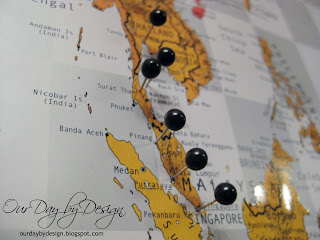 Although it wasn't really part of our anniversary gift, we have just subscribed to both the Lonely Planet & Wanderlust travel magazines, which are also paper! We also got each other a card and we received lots of cards from family and friends as well which was lovely as I wasn't sure how many people still send anniversary cards. Some we took with us to open while we were away. There was also a lovely bottle of champagne from parents and a couple of bottles of sparkling rose from Graham's parents to enjoy!

*Our friends are about to celebrate their 7th anniversary, which is wool, and Graham suggested they go to New Zealand. I'm totally going to remember this for the future and maybe our new plan should be to visit a country that's to do with the item; I'm thinking India for Cotton & Italy for Leather; maybe we should have went to Egypt for paper!

I love hearing from you; thanks for leaving a comment!

Other places to find me